Many Celtics fans (us included) were furious with Danny Ainge when he traded the #1 pick in the NBA Draft and then missed out on trades for prized players such as Jimmy Butler and Paul George; however, now that the dust has settled with the signings of Gordon Hayward and Jayson Tatum, New England has to feel pretty good about the team playing at TD Garden this fall. In Danny We Trust.

Similarly, there is much angst all over cable news and the financial networks, it seems, since the election in November: Democrats are mad at Republicans, Republicans are divided amongst themselves, Kim Jong-un is still firing missiles out of North Korea, and investors are concerned that yet another quarter of stock market highs will lead to sudden drops moving forward. While you may be disappointed that healthcare or tax reform have yet to come to fruition or that interest rates remain stubbornly low, we would encourage you to stay patient. To borrow a phrase of the rival Philadelphia 76ers, “Trust the Process.” 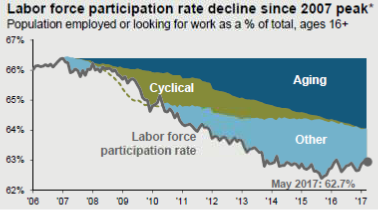 The United States economy has now entered its 96th month in expansionary territory and, based on the underlying fundamentals that we will discuss, looks poised to surpass the longest economic expansion of 120 months that occurred in the 1990s. Job openings hit an all-time high in April as the unemployment rate hovers at a very low 4.4%. While the labor force participation rate has crept lower over the last 10 years (from 66% down to 63%), it appears to be due to baby boomers retiring and younger workers staying in school rather than a systemic issue with the labor force.

The Federal Reserve felt confident enough in the economy to raise interest rates a second time in 2017 despite inflation running well below the central bank’s expectations. They have also announced their intention to “unwind” their balance sheet by selling mortgage-backed securities and treasuries acquired during the financial crisis to stabilize the economy. To us, this is the potential source of economic drag that could prematurely derail the current economic expansion. In Janet Yellen We Trust?

Though U.S. stocks have performed well again this year (up 9.3% year to date), they were not alone. The rest of the world is experiencing its highest level of growth since 2011. This has trickled down to company earnings and stock market returns, where emerging markets led the way at 17% year to date. European stocks have not been far behind (up 16%) and are still “cheaper” relative to U.S. stocks, which are trading at a 9% premium to their 25-year average. While some sectors of the market like telecom and oil stocks are down, the rest are up; the only asset class showing weakness in 2017 remains commodities, down nearly 7% year to date due largely to the price of oil.

Predicting the future of the economy by some “traditional” metrics has been difficult due to the ever evolving world we live in. Instead of factories and brick-and-mortar retail stores, we have more phone apps and online spending, leading to lower capital spending. Additionally, the free trade movement of capital and products has led to cheaper labor and cheaper goods, ending in lower inflation. While there are small short-term warning signs on our dashboard (light vehicle sales and housing starts were down the past two quarters, while the yield curve has begun to flatten), we see more positives than negatives heading into the last half of 2017. Thus, if we do see a market pullback, we would urge you to keep your long-term objectives top of mind and “Trust the Process.”

Of course if you have any questions, concerns, or need to discuss changes in your financial situation or objectives, please do not hesitate to reach out to us.

Last quarter we teased you with information about our new website -- well, we’ve finally gone live! While we are still working out some of the kinks and getting used to how to make it work best for our clients, we wanted to give you a peek at the landing page if you haven’t yet seen it.

We also have an app for your iPhone and Android device to help deliver information on topics that are customized to your preferences. There is more to come on that in the future.

Last quarter, we replaced our old client portal with a new ShareFile portal to serve as your Fiduciary Vault. In the last letter, we inadvertently included the wrong URL leading to some confusion and for that we sincerely apologize. Now you can just click on Client Access on the new website and then select Quarterly Performance Report Archive to access your fiduciary vault. For those that would like the correct URL, simply use fncadvisor.sharefile.com.

Security of your financial information is our highest priority, of course, so all of the vendors we use, from the ShareFile portal to the encrypted emails we send, are with your ultimate security in mind. Yes, this often comes with complex passwords and various methods of electronic authentication, but it is very necessary in this environment of online snooping.

As always, we value tremendously the trust you have placed in us. If there is anything we can do to assist you in attaining your personal or financial goals, please do not hesitate to contact us.